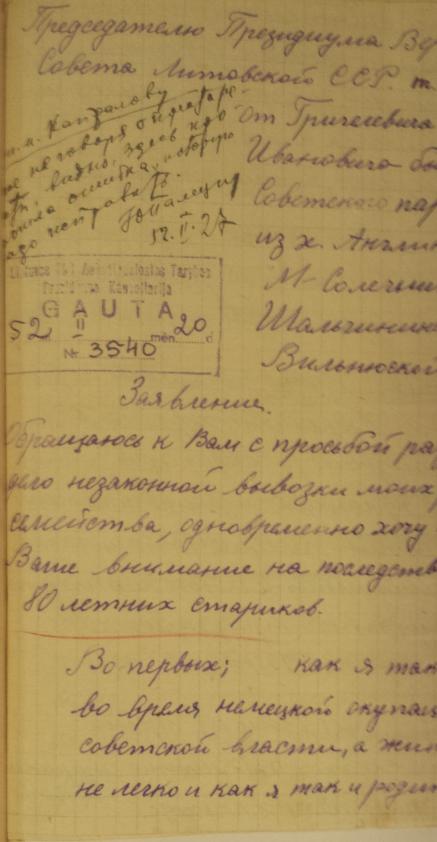 The exiles did not just accept their fate, but found various ways to evade   it. Even before Stalin died, Lithuanian, Ukrainian, and other deportees wrote letters attacking the errors and injustices they had suffered. They sent them to senior officials in the Soviet state, the authorities in their own republics, the Chair of the Presidium of the Supreme Soviet, First Party Secretary, Chief Prosecutor of the USSR, Commissioner or Minister of Internal Affairs, etc. Most of these applications or complaints received no positive answer, although in some exceptional cases, such as evident errors (namesakes) or the deportation of an informer, the Minister of the Interior would agree to a request for release.

After Stalin’s death, there were many changes, and the commissions examining complaints and petitions became much more open and gave a full, or partial, positive answer, as in Lithuania and to a lesser extent in Ukraine. The authorities of the various republics received thousands of letters petitioning for release, return of confiscated property, etc. These letters, whether brief or pages long,   reveal how these people in exile or in prison approached the authorities and attempted to convince them. They told their life stories in their own way; they sought to inspire pity or expressed their anger.

In 1954, Iossif Lipman submitted a long petition to be released from deportation, where he had been sent in March 1949, like so many other Lithuanians in Operation Priboi (Coastal Surf). Before the war, he had been a butcher’s assistant and was probably considered as having escaped deportation in June 1941, when small shopkeepers and artisans were sent away. His letter of complaint, however, is that of a man and his family who, less than 5 years after their liberation from the horrors of German occupation, were deported to Siberia. Iossif Lipman, a Jew from Kaunas, was one of the few survivors of that city’s ghetto, and his letter tells of his tragic fate as he went from ghetto to Siberian exile. The tragic fate of an entire family, because his sons were arrested just after the War (not mentioned in the letter), one for having tried to escape to Poland, as many Soviet Jews did, and the other for knowing of this attempt and not reporting it, and not least for preserving documents concerning the ghetto, which caused the NKVD to accuse him of Zionism.

The accompanying photo   shows a number of survivors, including Iossif L. and his wife, just after the liberation of the ghetto, standing in front of the bunker where he had hidden (in the basement of a building in the ghetto).

To the Minister of the Interior of the USSR, Com[rade] Kruglov
Cc: Head of Directorate, Ministry of the Interior, Vilnius
From Cit[izen] Lipman Iossif Naumovich, 84 Lebedev Street, Appt. 1, Krasnoyarsk

I, Iossif N. Lipman, was born in Kaunas in 1889 and lived there continuously until 1945. Since my childhood, I have specialized in meat, and so I worked from 1920 to 1940 as a manual operator in the Kaunas meat factory.

During the occupation of Lithuania by the German invaders, my family and I were obliged to survive all the horrors of German persecution; on a number of occasions, we were close to dying, and our survival is simply a miracle. We only stayed alive thanks to my two sons who during these years were in contact with the Forward   detachment of partisans (headed by Com[rade] Ziman, known as ‘Jurgis’). Unbeknownst to the Germans, they managed to build a safe shelter where we hid during almost the entire occupation, and stayed underground and didn’t go out during the four months before the final defeat of the Germans.

It was only the arrival of the Red Army in Lithuania that saved us; a detachment of sappers dug us out because the Germans, before leaving, had blown up the house above us. That was in July 1944.

When I came out of the shelter, I learnt that all my relatives had been killed, my sisters, my brothers, other relatives, and friends. I could no longer live in Kaunas, nor did I want to, a city full of memories of what happened to us. So I moved with my family to Vilnius.

In March 1949, I was told, unfairly and unexpectedly, to resettle in Krasnoyarsk.

Throughout my long, hardworking life, I have never owned a house or a shop, and so I was offended by this turn of events just as I was getting old. Wherever I have worked, I have always done the work honestly and conscientiously because it is not in my habit to relate to work any other way.

My eldest son, Lipman Ruben [Ruvim] Iossifovich, born in 1907, was resettled with me because, not being married at that time, he was living with me. Five months later, when we were already in Krasnoyarsk region, we learnt of the sudden death of my wife, who had not stood up to this new shock.

From 1949 to 1951, my son and I worked in the village of Solgon, Uzhur district. Because of our honest work, in 1951 we were sent to exercise our special skills at the Uzhur meat factory, where I received many rewards and bonuses for my work.

In February–March this year, my son, who was living with me, fell seriously ill. Because of the seriousness of his illness, a brain tumour, he was sent to Krasnoyarsk for treatment and stayed in hospital for more than a month; then because there were no brain surgeons in that city, he was sent to Novosibirsk to be operated on. He died during the operation. That was on 12 June 1954.

After this second misfortune for my family, my other children (my younger son and my two daughters) came to stay temporarily with me in Krasnoyarsk so as not to leave me alone, because I have stopped working and depend on my children.

My younger son Lipman Efim [Chaim] Iossifovich, born in 1913, worked as a chief drainage foreman on the building of the Volga–Don Canal until the end of the mission; he received many rewards and bonuses for his excellent supervision of the work, some personally from the Chief of Construction, General Shiktorov, the Minister of the Interior, Com[rade] Kruglov, and his deputy, Com[rade] Serov; you can easily confirm this  .

My children only came to Siberia on my account and will have to return home; I hereby request, therefore, that you re-examine my situation and remove the restrictions to which I am subject, for I have no sense of guilt; all our family, to the contrary, has always sympathized with the Soviet government.

I request that you allow me to return freely to my homeland so that I can live as a free man in the few years I have left, and that I no longer bear the burden of being a man with restricted rights, a burden I find intolerable. I request that you authorize me to live where my children live and be able to visit the grave of my late wife.